Why I Will Be Forever Grateful to the NHS 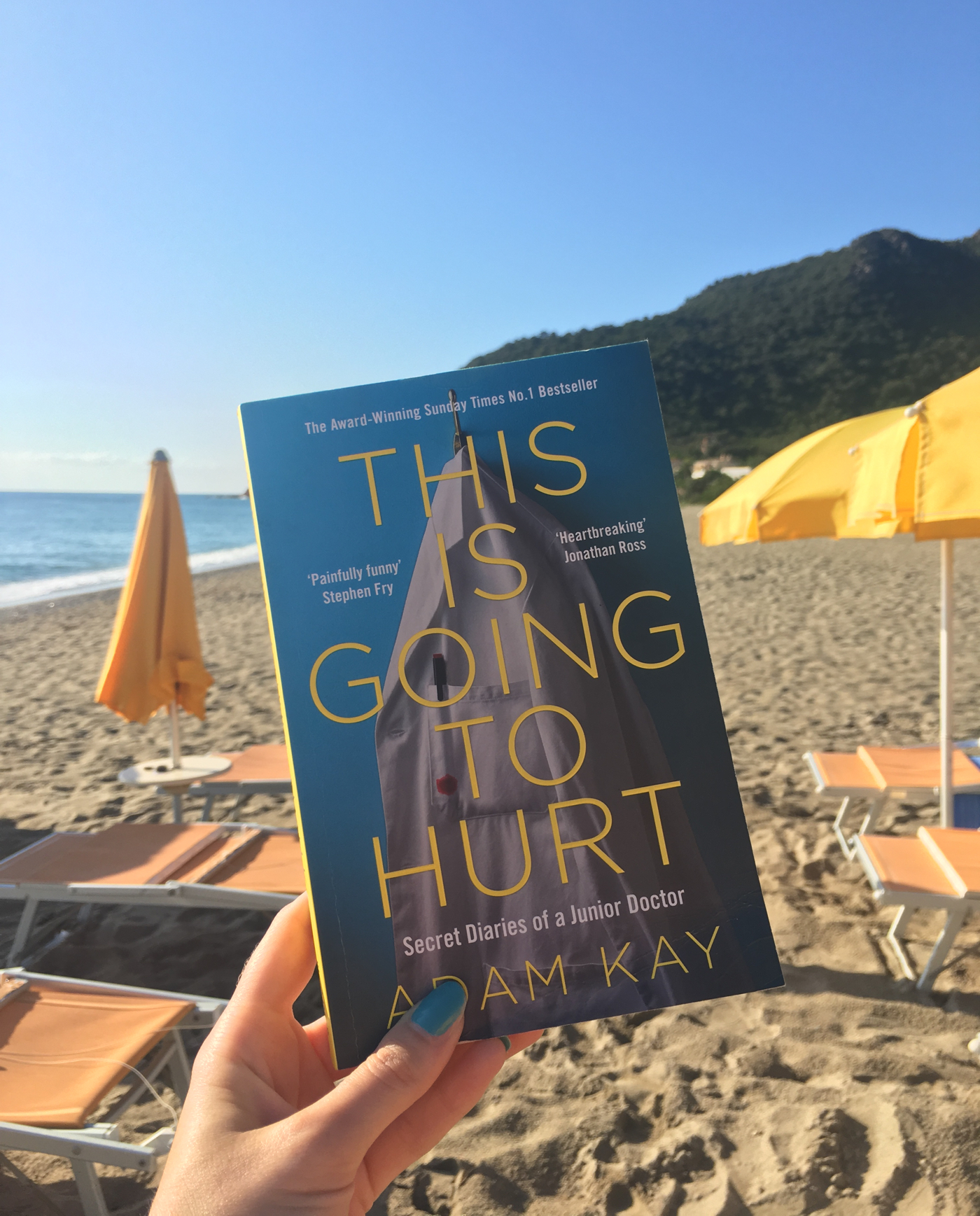 I’d been wanting to read Adam Kay’s book, This is Going to Hurt: Secret Diaries of a Junior Doctor, for a while and finally remembered to grab it from the airport on the way to the surprise I’d booked for the husband as an anniversary, birthday and fuck-it-you-only-live-once holiday. I devoured it over two days. Reading endless paragraphs out loud to my husband, either in horror or hilarity, at Adam’s diary entries as a junior doctor.

This book is brutal in its honesty. It’s funny. It’s important. And it’s heartbreaking. I feel like I understand more. Sympathise with doctors more. It gave me all of the feels.

I owe a lot to the NHS and am proud of my family and friends who work there, for everything they do for patients, like me. Which is why I wanted to write about a couple of my experiences. The times they’ve picked me back up after a few falls and dusted me off.

Now, I’m absolutely crap with dates and my memory isn’t the most reliable these days, so we’re going for a lot of guess-work here… Stick with me.

I was always relatively healthy up until my late teens when I started getting bouts of tonsillitis on and off, every month, for over six months. It was far too frequent and due to me having a particularly large right tonsil, the doctors decided to whip them out in a fairly routine tonsillectomy. Before any operation you’re always warned of the risks, there was a tiny chance of a post-op bleed but the chances were slim. I was all like, yeah yeah whatever, knock me out already – I should state that I have no idea if I was actually like this but imagine I was likely to be more nervous about being knocked out for the first time.

Anyway, the op went well, I had a rather large hole where that beastly right tonsil once lived and was sent home.

*WARNING: If you’re a tad squeamish, not a fan of blood or horror stories, this isn’t for you. Please stop reading.*

The next morning – and I will forever remember this moment – I noticed that when I coughed, there was blood on my tissue. I coughed a bit more and a bit more blood came out. Until it began gushing out of mouth. Clots and all. I screamed for my parents before running into the loo and splattering blood everywhere. I was covered. The loo was covered. It was everywhere. In a blind state of panic my parents drove me to a walk-in centre with me in my blood splattered pyjamas, holding a washing-up bowl under my mouth. The receptionist thought I was having a nose bleed and for some reason we were told to drive to A&E.

I have a patchy memory here but do know I was in an absolute state, and that was before the A&E team stuffed a wad of something down my throat on the wound to stem the bleed. I have a very quick gag reflex so of course handled this very well. This resulted in one of my first panic attacks.

Once the bleeding had stopped I was knocked out and wheeled in to surgery to have the open wound stitched. That bastard right tonsil was still out to get me.

What are the chances of getting a second post-op bleed I hear you ask? I have no idea. But I got one.

I was released from hospital, after what I’d like to affectionately call the patch up job and woke up the next day at home, had a little cough, noticed more blood. I wondered if I was in some kind of weird dream. Surely this couldn’t be happening again.

But it did. And it was worse. Because this time I really went to town, physically pulling the clots out of my throat in a bid to clear my throat, ripping the stitches that held my tonsillectomy wound together. The upstairs loo looked like something from a horror scene. This time my parents called 999 and an ambulance arrived to pick me up, providing huge gossip for our quiet cul-de-sac. I’d lost a fair bit of blood and couldn’t stand on my own and will forever be indebted to the paramedic who carried me like a baby into the back of the ambulance. He even gave me a teddy for my bravery and attempted to calm me down. That same hero of a paramedic carried me back to the ambulance after they’d stopped the bleed at my local A&E before taking me back to the hospital I’d had the operation at. I will never forget him.

Again, my memory is hazy but there are a few stand out moments from my third trip back to hospital.

Not being able to move from my bed without assistance because I’d lost a fair bit of blood and had no energy.

Having a blood transfusion line and a drip in opposite arms and getting in a tangle every time I tried to go the loo, resulting in one of the nurses coming to untangle me.

Passing out in the loo, having my cousin catch me and then waking up laying on the bathroom floor, with my legs being held in the air and all the nursing staff peering down at me. I’m pretty sure I laughed at my predicament.

Having some weird-ass nightmares on whatever concoction of drugs I was on and being comforted by the team that looked after me.

The good news is, third time worked a charm. 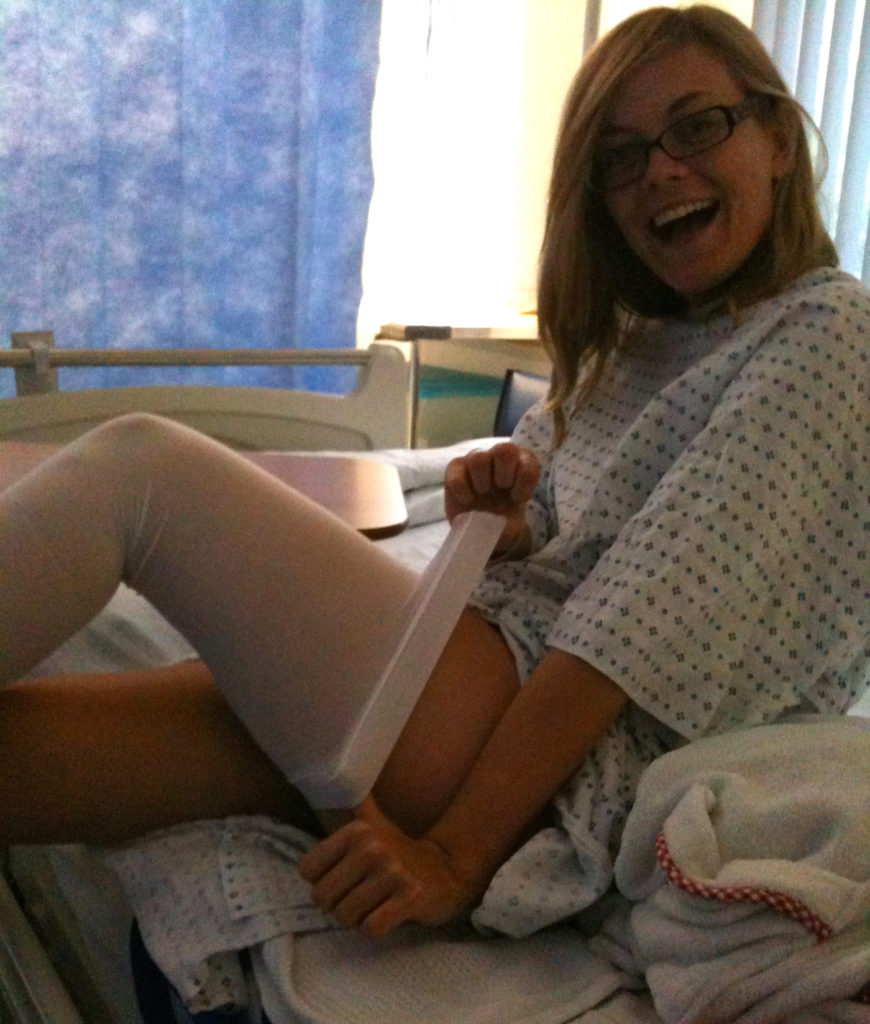 Have you ever seen a sexier stocking? I think not.

My second major operation came maybe 8-9 years ago, when a large lump appeared in my throat, resembling an Adam’s apple. I had numerous doctor’s appointments, scans, prods and pokes – including a horrendous visit where one doctor tried to drain the lump with a needle, thinking it may have been a cyst, which resulted in blood, more swelling in my throat, a panic attack and strong painkillers – before it was decided it looked like a mass of cells winding their way round my thyroid, which was starting to block my wind pipe.

My consultant was brilliant. She whipped the tumour out alongside half my thyroid and had my throat stitched up. Unfortunately my scar was hypertrophic, meaning it healed with a wedge of scar tissue, all lumpy, bumpy and angry-looking. I went back in, had the old scar cut out and my surgeon stitched me back together herself. Monthly steroid injections followed to help it heal properly and the advice from my consultant to never get a face lift, as I would scar badly!

The worse part of it all was waiting for that final appointment to find out whether the tumour was benign or cancerous. The anxious wait in the canteen was horrible, especially as we always arrived super early. That morning, my consultant passed us in the canteen, saw our worried little faces, smiled and told us it was good news. The relief flooded through us.

The NHS have saved my cousin from her severe peanut allergy multiple times. They’ve resurfaced my dad’s hip. Removed a benign tumour from my mum’s neck.  They’ve stabilised my brother after another epileptic fit. They nursed my grandad through his cancer treatment. Helped many of my friends through complicated childbirth. They’ve even mended my husband’s little toe after he dropped a TV on it, smashing the bone to hundreds of pieces. They are amazing. And I wanted to celebrate that.

If you do one thing today, buy the book. It’s an eyeopener.

Fucking hell, that was cathartic to write.

The Empowering Feeling I Get When Speaking…

Why I Need Sunday As My Recovery…

The Feel-Good Power of Buying Yourself Flowers

Why I’m Holding Myself Accountable to Move…