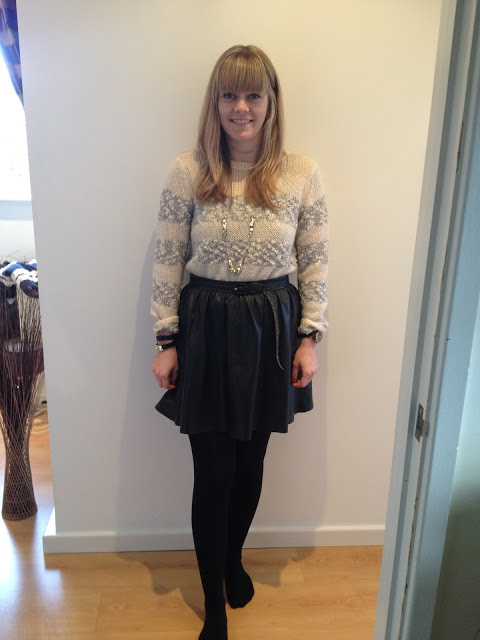 So Santa clearly knew that I’d been a good girl this year as my stocking was full of beautiful things. My Christmas haul included Grace Coddington’s memoir, a Model’s Own nail art set (expect more on this as I get more creative), Calvin Klein pj’s, a Topshop jumper, Zara leopard print coat and a leather bracelet from Whistles.

Two of those things came with a side order of sequins. Those same two things came from the not-so-new boyfriend. It’s almost as if he knew…

First up was this cosy Christmas-themed jumper from Topshop. I don’t usually go for light colours as they wash me out, but the silver detailing adds depth and as for the sequins… well. I’m in love.

I paired it with my Warehouse leather skirt, and striped black tights. The perfect outfit to hide my Christmas overindulgence.

One of my favourite presents has to be the Whistles bracelet I wore with it. In fact, since I opened it on Christmas morning I haven’t taken it off since, except to shower, which I think is perfectly reasonable.

It’s a strip of black leather which wraps twice round my bony wrist. Half of it is plain black, the other half has a shed-load of black glitter added. It’s all topped off nicely with two whopping big gold studs. If I had to be described as a bracelet (stick with me here) this would most definitely be it. It has that tough, rock vibe going on as well as being a statement piece.

Want to know the best thing about this outfit? I’ve found that sequins completely deflect and distract attention from bulging Christmas bellies. I won’t be taking it off until end of January then.

Did you get any sequins from Santa?

New Metallic Ruby Converse Get on My…

Want it on Wednesday: ASOS Dungarees

How to Organise Your Wardrobe

Berry Good Lips I Swear By