What to See and Eat in Tintagel, Cornwall 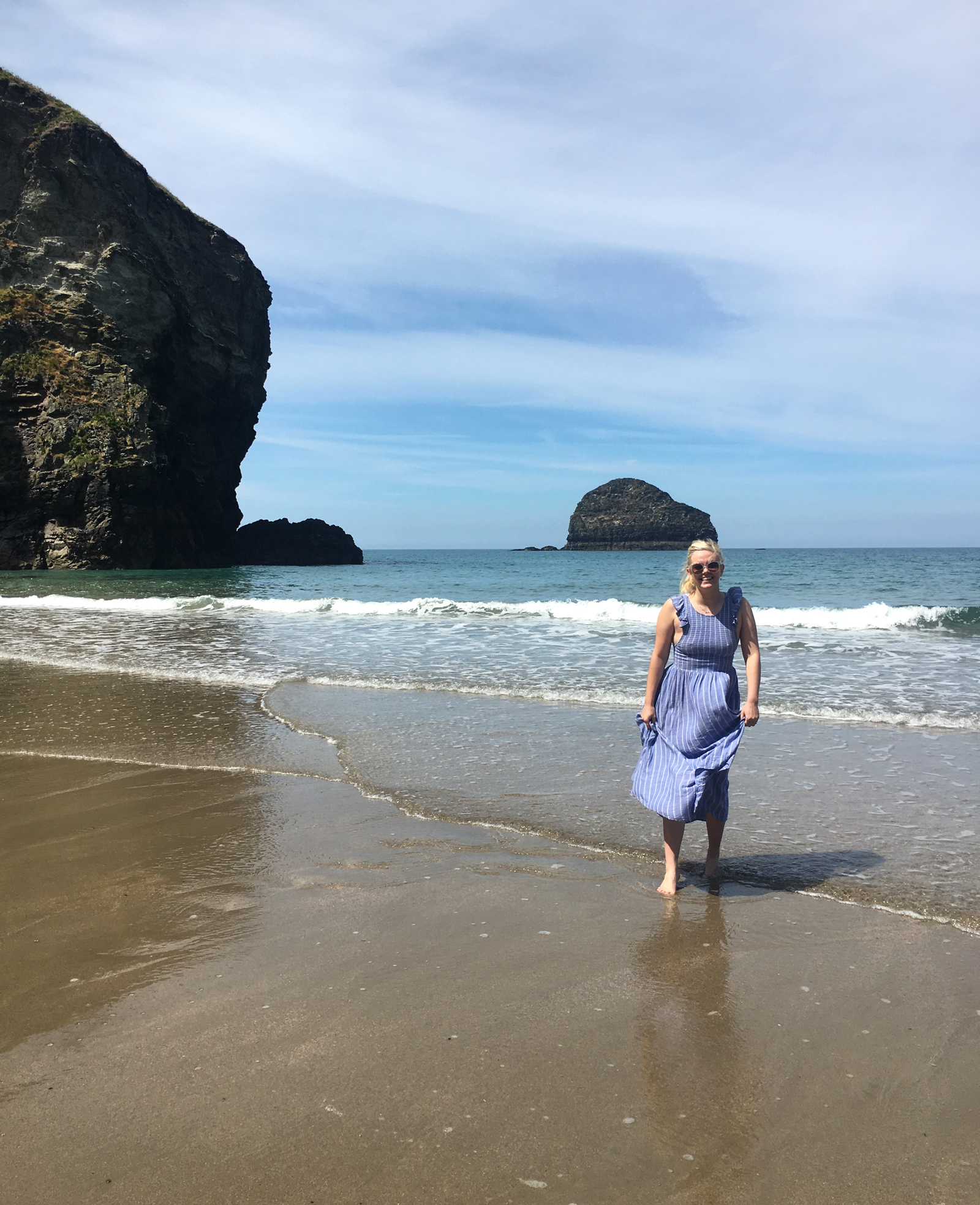 I’ve been looking forward to writing this post, because although we only had 4 days in Tintagel, we sure as hell made the most of it, packing in as much as possible. It was a freaking glorious trip and I can’t stop telling everyone about it.

First up, I want to give a shout out to where we stayed, the Seaview Studio, as it suited us perfectly. We found it on AirBnB and immediately fell in love with the view of the sea from the little terrace and the fields that surrounded us.

While we stayed there, the field was home to a flock of sheep and their lambs which made for adorable neighbours. Our hosts were extremely welcoming, giving us lots of advice on things to see and do, and although I obviously already had an itinerary planned, they offered up some great hidden gems and local places to eat.

Part of the reason we chose to stay in Tintagel was because of Trebarwith Strand. It’s my auntie’s favourite beach, and we’ve been multiple times as a family whenever we’ve holidayed in Cornwall or Devon. It’s one of those magical beaches that looks wildly different at every hour. When the tide is out the beach stretches out for about a mile of golden sand, exposing the caves and rock pools. When the tide comes back in this all disappears, leaving just the rocks at the base of the cliffs.

We visited multiple times and at different times of the day, from early morning when it was grey and the waves were crashing against the rocks, to the afternoon where the tide was out and we could stroll right down the length of the beach, taking in all the muscles left clinging to the rocks. It’s a pretty magical beach to spend the day at, to sit and watch as it changes around you.

Tip: Nab a table on the cliffs of The Port William Inn pub and order the fish and chips because you will not regret it one tiny bit. Best ever. The view is pretty special too.

And don’t forget to check the tide times before you visit.

Our hosts recommended coming here for our first dinner and a quick walk after the 4 hour car journey. We were knackered but as soon as we saw the sea, both of us felt our tight shoulders ease up. The tide was in when we visited so we immediately climbed to the top of the cliffs to really be able to take the entire view in. I was not dressed for this in a midi dress with a huge slit up the front but seeing the big blue stretch on forever was well worth the thigh chafe.

Tip: Eat in the Coombe Barton Inn and if it’s on the menu, order the Bakewell tart for dessert. I promise you won’t be disappointed. It was a huge slice, that obviously I cleared. Heaven in every bite.

This was a little local delight which our hosts gave us a nod to one afternoon. You walk through farmland, and then down steep steps (the way back up was sweaty) and then bam, you’re hit with the most beautiful sight. A hidden beach which feels like it was waiting for you to turn up. What’s more there’s a lil natural waterfall in the side of the cliffs.

We got there pretty late in the day as the tide was coming in so weren’t able to explore the huge cave we were told about.

Tip: Keep an eye on the tides because once they come in, everything vanishes.

God knows I love me a waterfall so you can imagine my delight at finding out there were three at St Nectans Glen, which was right around the corner from our studio. The anticipation had been built up as you walk down a pretty country lane and then through an ancient woodland to get there. It was like walking through my imagination when I used to read Enid Blyton books as a kid. The way the trees touch from either side of the banks. The burble of the River Trevillet as it meanders back towards the sea. The birds tweeting their own tunes. Pure magic.

For me, it was all about St Nectan’s Kieve, the whopping impressive 60ft waterfall. You pay ahead of entering and are then taken up and around on a walk to really admire it before being able to stand in the pool it creates to admire it up close. They provide wellies free of charge but I’d wholeheartedly recommend going in barefoot, as we did.

I’ve never felt so grounded and connected to the earth, to myself, to nature. It felt like a sacred place to remember loved ones and the message on the slate in the picture above made me shed a tear.

TIP: Go first thing in the morning to beat the crowds and spend as long as possible in the waterfall because once you leave that area, it’s over.

We knew that the castle was closed until the summer as they’re currently building a new bridge but wanted to wander down and have a nosey anyway. What started as a little walk quickly turned into a long walk around the coast, with us stopping for a break at Barras Nose. The views were epic.

TIP: Stop off in the hightstreet for a classic Cornish treat at Pengenna Pasties. Beware, they are huge! This tip comes courtesy of my auntie again, we weren’t hungry at the time so missed out.

While the Eden Project is not in Tintagel, but an hours drive away, I have to recommend a visit as we had the best time. We spent hours wandering around, especially in the Rainforest Biome, obviously.

It’s safe to say we both left a little bit of our hearts in Tintagel. I just have to think of the trip and I’m beaming my Chesire cat grin.

13 Things I Do To Feel Calm

Why December is My Favourite Month

The Feel-Good Power of New PJs

Why I Need Sunday As My Recovery…

Share:
PREVIOUS POST
"Being on Holiday Makes Me Fall in Love with My Husband All Over Again"
NEXT POST
"My Garden is an Oasis of Colour and Calm"

2 responses to “What to See and Eat in Tintagel, Cornwall”