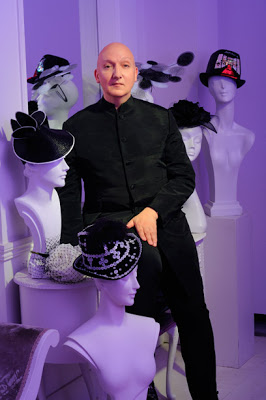 For a while now I have been wanting to go to the Victoria and Albert Museum and see the exhibition, Hats: An Anthology by Stephen Jones. I absolutely love hats and although I don’t actually wear them that often or even own many, I am extremely fascinated by them. I love the way the different shapes are sculpted, how some of the details are so intricate you don’t notice until you study the hat. Millinery is such a great art form. It can be more extravagant then clothes and give that final touch to an outfit, totally transforming you.

I thought I’d upload a video of Stephen Jones just to give you a bit of an insight. This is the man that started my love for millinery…

On Location: An interview with Stephen Jones from Victoria and Albert Museum on Vimeo.

Mr Stephen Jones with some of hats that were on display

One of my faves… Stephen Jones- Wash and Go
This was made from a plastic sheet that was moulded into this beautiful creation.
This collection saw hats throughout all ages presented, it ranged from famous show hats, such as Jay Kay’s feather headdress, to Camilla Parker-Bowles headpiece she wore for her marriage, as well as Stephen Jones pieces. It also featured a hat from relatively new milliner, Justin Smith who I have written about before for another website, it was amazing to see his work close up. If your in London and find yourself with a spare afternoon and a spare fiver I would definitely recommend it…

There’s nowt wrong with a bit of…

Kate Moss is Back and She’s Wearing…