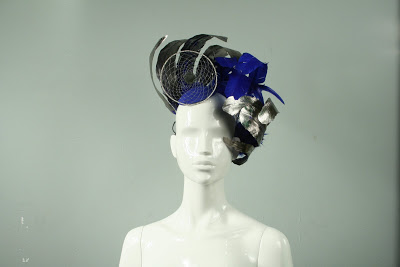 Every now and then I have disastrous hair days, not just bad. Disastrous. Instead of just covering my head in a paper bag with two eye holes, which may be a bit impractical, I started covering it with big oversized beanies. Although, this seems to worsen the frizz element when I remove it. I deemed it a lose lose situation until I found some statement headpieces that made me think otherwise.

Milliner Justin Smith made my eyes bulge with delight, not a pretty image. His hats are an intricate mix of origami headbands, feathers, bows, netting and beads draped delicately around the side of the face. The pictures are taken from his Spring/Summer 09 Kaleidoscope line.

Justin started out working as a Toni and Guy hairdresser before starting to make hats way back in 2000. Since then his hats have earned him New Generation sponsorship allowing him to show at London Fashion Week last year. I love the way each hat could represent a different personality maybe depending on how outrageous and brave you were feeling.

As the man himself says: “Transparent, pearlescent, iridescent, incandescent: twirl the Kaleidoscope and a myriad styles unfurl.”

3 Ways to Wear a Midi Skirt

9 Stories to Read This Sunday