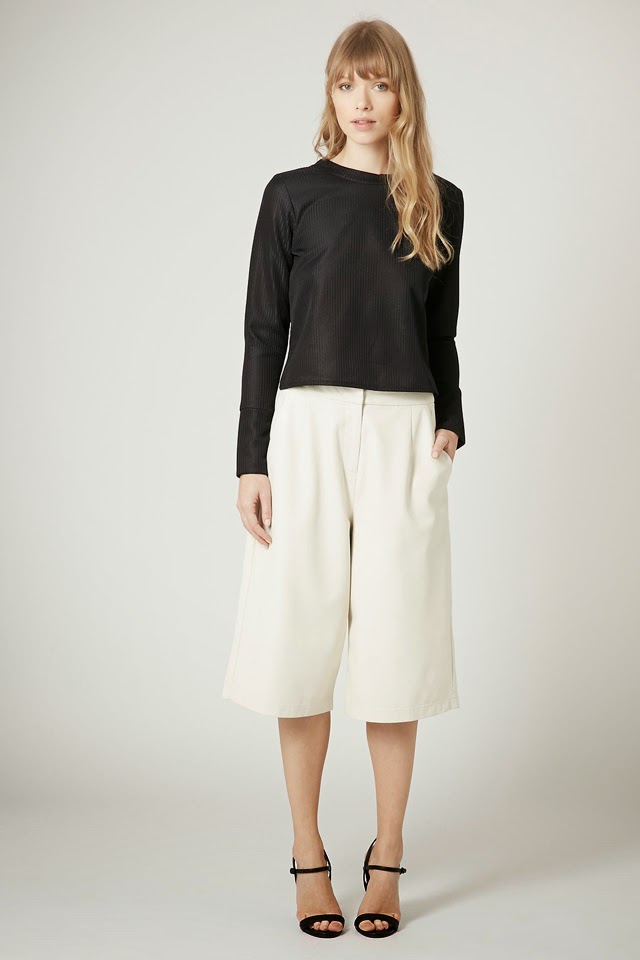 At work recently I was asked my opinion on culottes. I’m actually all for them for many reasons but this is slightly tainted by my memory of being forced to wear brown culottes at Brownies. That and a work colleague describing them as baggy pantaloons.

If they’re longer than knee length, structured and not flimsy (no linen allowed) and are either smartly plain or covered in a funky pattern, I’m in. Those are my only culotte-based stipulations.

I’ve scoured the web for the 5 pairs that I want to purchase immediately, and if I had the money to, would.Topshop Faux Leather Culottes, £36, pictured above.

I’m normally put off by white or cream or light colours in general as I am clumsy and messy and it will only take a matter of seconds to cover them in dirt and food. But these faux leather ones change everything. I want to live in them. Immediately.

All hail Stella. These bouclé culottes are wide legged, have a high waist and pressed pleats running down the front of them. They’re smart and look perfect with a crisp white shirt. Dressing for work couldn’t be easier.

Straight out of House of Holland’s Resort ’15 collection these trews are so good it hurts. Super wide, super long in culotte terms and covered in animal print. These couldn’t get any better. Apart from the fact that they’d look good with heels and flats. Winner.

These might be most affordable of the bunch but don’t let that fool you, the added tuxedo stripe takes these from day to night in an instant. Although they seem to be made of a less-structured fabric, this doesn’t seem to bother me at all. I’m also loving the dark navy rather than a standard black.

Hello cream and tan silk. Never before had I thought I’d say that statement. I love the contrasting stripes, the pockets and the fact that you don’t even know they’re culottes – see I’m still traumatised.

Still not sold on culottes? Relax in the knowledge that when you stand with your legs together it basically looks like you’re wearing an A-line skirt. And even better, you’ll never reveal your pants if a gust of wind catches you off guard. Bonus.

Hits & Misses from the Golden Globes…

The Two Suede Skirts You Need to…