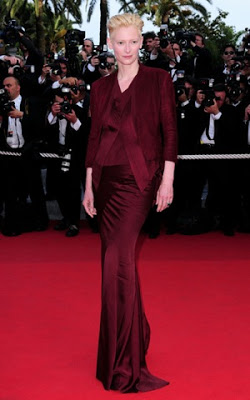 I love Tilda Swinton. Fact. She has this effortless beauty and style and is never afraid to take so called ‘fashion risks’. She has an amazing figure which manages to manipulate the clothes she wears into something extraordinary. Even if she is seen wearing something complicated she never looks over styled and she doesn’t conform to trends….this is why I am excited that she has been chosen to be the face of both Pringle’s menswear and womenswear spring/summer 2010 campaign.

“We don’t want to go away from [our traditional customers] – we believe Tilda is more inclusive, as both young and more mature people identify with her acting,” Pringle’s director of global communications, Benoit Duverger, told WWD.

The campaign will be shot in Scotland by photographer Ryan McGinley alongside a short film of Tilda. I can’t wait to see the final results. I’m expecting something traditional but with an edge, something that screams high fashion but is attainable too.

2009 Cannes Film Festival in Haider Ackermann, The 2009 Oscars in Lanvin.

Tilda for Another Magazine.

And a little pic of models Pixie and Daisy in Pringle’s last campaign….

The Summer Shoes I Want to Wear…

Black and white with a stripe…

Want it on Wednesday: The Patch Faux…

5 Reasons You Need a Shirt Dress