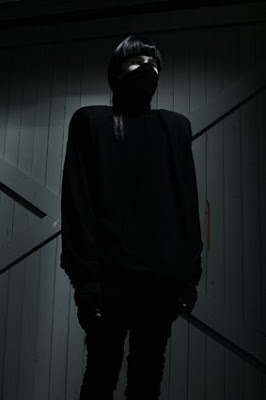 In order to make up for yet another long absence I will hopefully be blogging a lot in the next couple of days and it’s most likely to be me catching up on LFW. (Incase you’ve been wondering where I’ve been, me and a girlie friend treated ourselves to a lil spa break darhhling and then the boyfriend whisked me off to Milton Keynes to complete my driving experience.)

Anyway just wanted to spread some love about Anneloes Van Osselaer, hailing from Amsterdam, (a place I think doesn’t actually get enough fashion praise, but I’m working on it) Anneloes studied fashion and design at AMFI, Amsterdam Fashion Institue, before launching her own mens line.

Her designs are dark and moody, primarily in shades of black and off-white. Her latest A/W 09/10 collection, ‘Spuk & Grusel’ is inspired by spirituality. Anneloes says, “Spirituality to me is a very mysterious, airy-fairy, dark and even creepy thing,” and this completely conveys in her clothes where she focuses on the parody of modern day spirituality, mixing spook, ghost and bat shapes into her designs.

Anneloes focuses on covering the body in some sort of shell, which then allows the wearer to come out into their own little world.

I love the way the scarf is a mix of many lengths of fabric which drape around the neck, winding into little bats at the ends.

This is a pretty serious drop crutch which I’m not sure many men could get away with wearing. It reminds of some sort of pyjama/ thermal bodysuit babies would wear.

To Fake Tan or Not to Fake…

10 Stories to Read This Sunday